It says, somewhere down near the bottom of this page, that this was written in 2003. That’s not entirely true.

Right now, as I write this, it’s 2018, not 2003. Back in 2003, when I’m pretending this was really written, I was a lot younger, a fair bit thinner, and had a lot more hair (of which a lot less was grey). I had one fewer wives, three fewer children, and Added Bytes wasn’t even Added Bytes – that name came a little later, after my original domain caused a minor legal quarrel with a large American whisky-maker.

So why the charade? Well, Added Bytes has come a long way since then. So long, in fact, that it is no longer a personal blog, or a personal brand – it is now a registered UK Limited Company, with employees and an office and all the trimmings. And we’re recruiting for more. The previous website didn’t really fit the company of 2018, and so we started anew.

Still with me? I’m getting to the point, I promise.

We wanted to add a History page to the site, to show where we’ve come from and explain how this company appeared. Or should I say, evolved. Which brings me back to 2003 …

Added Bytes was, to begin with, a simple blog. I did manage to retrieve one of my earliest posts from an old archive, and it gives some inkling of what I had in mind at the time. That being mostly ranting, by the sound of it:

In September of 2003, I put together this site as a place for me to offer tips and advice to budding webmasters and developers, and as a repository for tutorials and resources on subjects like PHP, CSS, Accessibility and more. And as a place to rant on about how great the Opera internet browser is, how rubbish Internet Explorer is, and how great it would be if all browsers supported standards completely instead of only half-bothering. And to rant about why PNGs have not yet made it into the mainstream. So quite a lot of ranting to be had, I should think.

I was learning my way around technologies like PHP, ASP and CFML while working at a web development agency in Worthing. My blog gave me an opportunity to tinker with things I didn’t often get to tinker with otherwise, like CSS and JavaScript. Writing about the things I was learning forced me to ensure a reasonable understanding of what I was talking about and gave me access to a whole army of critics, constructive and otherwise. 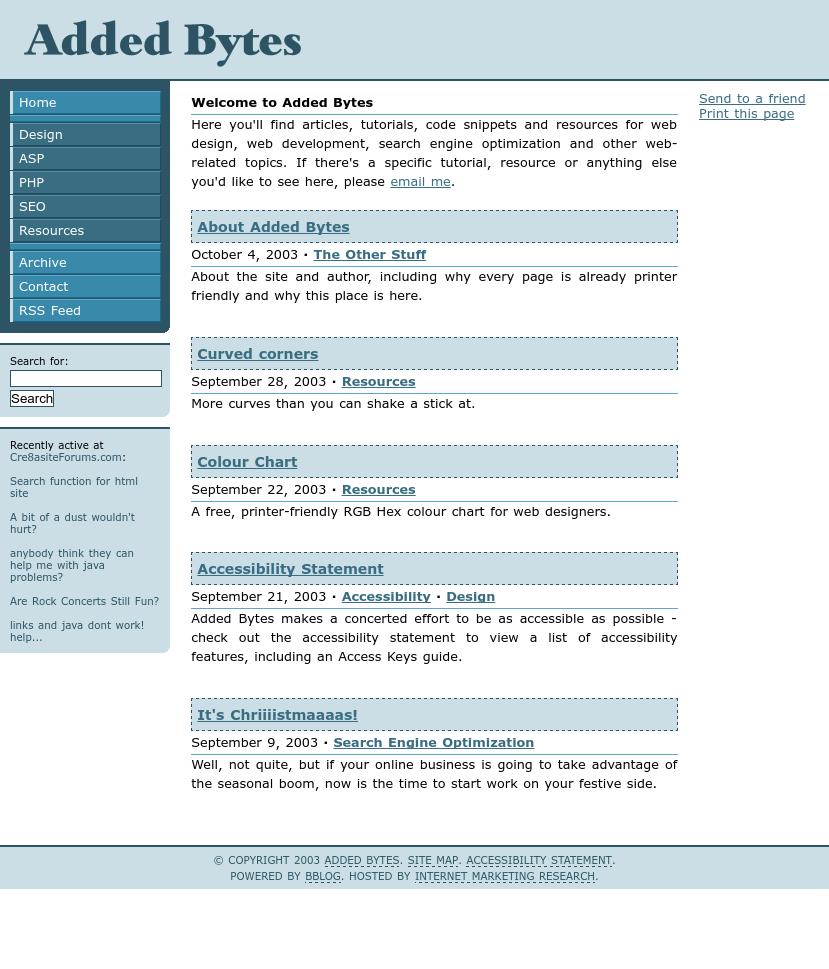 It was a lot of fun.

Since then, and until 2012 when the site became the home of my new freelance web development business, I continued writing about what I was working on. I released a few cheat sheets, wrote some small tools, open-sourced some code and created a few useful guides to things like URL rewriting and regular expressions. You can find a few of those articles still kicking around on my current personal blog, AloneOnAHill.

At the time I was writing on Added Bytes regularly, it felt like there was a community of people doing the same thing. People linked to each other, and conversations spanned multiple websites. Before that, websites were even tighter knit, via webrings and guestbooks. People do still link to each other, but more and more they tweet a link or post it on Facebook, and conversations about that content fly by in moments and are lost in the noise.

It feels, if you’ll pardon a moment of nostalgia, like the web is becoming less personal, and less thoughtful, and less familial. I think that’s a pity, because those are the things I loved about the web when I started working on the first incarnation of this site.

On the other hand, the things people are doing with the web now would have blown my mind in 2003. It might have only been 15 years ago, but that was before GMail, before Facebook and before Twitter. Imagine where we’ll all be in another 15 years.

Well, in September 2003 the next thing on my list would have been to watch England in the Rugby World Cup. I do hope they do well, they’re on a bit of a roll at the moment …

Dave is the founder of Added Bytes and has been building websites since the early 90s. He’s one of those fortunate people who gets to do what he loves for a living.